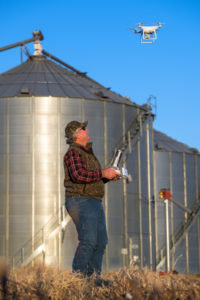 Louis Wasson, Mississippi State Senior Extension Associate whose specialty is Unmanned Aerial Systems in Agriculture noted that farmers have been “promised a lot” from drone manufacturers and sales people but he’s searching for the truth.

“There is a lot of hype associated with using aerial vehicles in agriculture. A lot of people are just trying to sell you something that hasn’t simply proven to be true or effective,” Wasson says. “I’ve been getting through the hype to get to what is practical and applicable for the grower that he can use every day.”

Drones are most useful for farmers to get a “bird’s eye view” of their row crops and other areas of the farm that they’d previously have to pay an ag pilot to fly over and look at or just do a lot of walking across thousands of acres of rice, beans, corn, cotton and more.

“First of all, it’s very convenient for him to get out of his truck and put it together and within five minutes being flying a drone over his field and get real-time information,” Wasson says. “The multi-rotor aircraft (a DJI Phantom) have become safe to fly. Normally you can see more than 10 to 15 feet from the turnrow but now you can actually see to the middle of the field. They know their fields better than anybody and know the hot spots and green spots but if there is something unusual they can look at it.”

Damage done by deer or wild hogs or even storm damage can be immediately assessed to quickly get on the road to fixing the destruction.

“When stuff like that happens in the middle of the field this is very handy and convenient. Rice growers use them to 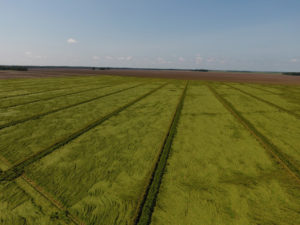 check levees and their gates. It saves them a lot of steps. Soybeans growers use them to check pivots. One soybean grower flies his drone out to figure out what tools he needs to take out to fix it and not make two trips,” Wasson says.

Farmer Bill O’Neal has been using a DJI Phantom IV drone to survey his acreage and it has become a handy tool.

“We use it for scouting fields and accessing areas of the field by air to look at things quickly,” O’Neal says. “We look at our center pivots and irrigation systems. We use it to look at damaged areas of the fields if at harvest time we have rice to get blown down – just basically field scouting a large area in a short period of time.”

O’Neal has been using his drone for the past two years and guides it using his IPad. 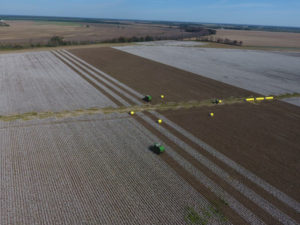 Etymologists are using the information gathered by the drones to help farmers work on insect control more efficiently as well. Wasson explains that those scouting the field “only see about five percent of the field as you walk through scouting but decisions based on that five percent can cover hundreds of thousands of acres. How much herbicide do I use? How much pesticide do I use? But now with the drone you pop it up in the air and see the whole field, not just five percent.”

O’Neal combines the drone with scouting to find problems quickly.

“If he sees something in the field that I need to be aware of like chemical damage or maybe a thin stand, he’ll tell me where the area is and I’ll fly the drone to that area and get an overall view of the affected area. Where it’s really been beneficial is actually seeing what percentage of the field is affected,” O’Neal says.

Wasson notes that drones are beneficial before planting in finding spots in fields where drainage is poor or where erosion is taking place.

“This is the time for the grower to address that. Even now in post-harvest when we get rains you can see channeling and ponding of water,” he says. “And that water is carrying weed seeds. It could be from the road or the forest of your neighbor’s fields. Ponding can have some nematode effect later in the year.”

Michael Aguzzi of Aguzzi Farms knows they are just scratching the surface in the use of drones.

“We honestly don’t use it to its fullest potential,” Aguzzi says. “One instance in particular has been to fly over and check rice levees if we suspect a break in one.”

Though the technology is useful, it hasn’t taken off as quickly as drone selling operations had predicted.

“It’s not the 80 percent that was forecasted it’s more like 20 percent. But they are starting to use them,” Wasson says. “And if farmers or scouts don’t want to take on the drone usage and getting the proper licensing, then there is an industry that has sprouted – UAS scouting. They go fly the field and turn the information over to the scout or the farmer.”

Before farmers can use a drone, they are supposed to have FAA permission through a remote pilot certificate. Wasson explained it’s easy to get in trouble.

“You need a FAA Part 107 Remote Pilot certificate. It’s all about safety. I strongly emphasize that people need to 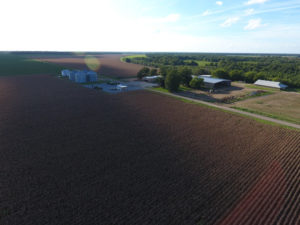 understand the airspace. These crop dusters are coming in over the tree tops at 150 miles per hour and they don’t see us. So, we’re working with them as well making up safety procedures. But the common grower needs to know he’s not up there all by himself. Safety is really important. There is study material on the FAA website to download so you can take the test,” he says. “But if you hire it out, make sure the first question you ask them is do you have your remote pilot certificate?”

Drones – even as useful as they are – are just tools for the farmer, according to Wasson.

“Drones will never replace the scout,” he says. “It cannot tell you what’s wrong. It gives you the picture but you have to decipher the picture and go out in the field and see.”

There are other technologies that can be added to a drone but the costs start to multiply quickly.

“If you have the typical multi-rotor drone, that’s about $1,500 with a good high-resolution camera. If you add thermal, that’s another $6,000. If you add NIR – new infrared – that’s like $4,000. If you have multispectral, that’s another $5,000 or $6,000. But then you have to get those images interpreted. That’s why I advise farmers not to fall into the multispectral. Your eyes are the best camera in the world, so use them. Your brain is the best computer in the world, use it.”

With the eye in the sky helper, farmers are able to make more realistic claims with crop insurance.

“Now when you submit a claim you can show the adjustor exactly what you see. This isn’t guessing form the ground and you can see it too,” Wasson says. “It makes everybody’s jobs easier.”

The technology continues to improve and Wasson noted that image processing is getting better.

“That has revolutionized everything. The processing software and the speed that they are doing it is incredible. And every three months it gets better and better,” Wasson says.