Precision King Helping those in need of water, find water

Sunshine and water are the two main ingredients to success for any farmer. Mother Nature can be stingy or excessive with both and the only thing the men and women who till the Delta soil have somewhat of a say is with water—sometimes. Wells that run deep in the Delta aquifer can bring up the life sustaining liquid, but these days, farmers have to be careful how much they use due to harming the environment and the costs. That’s where Rick King and Precision King can lend a helping hand.

The Yazoo City business was established in 2014 to help farmers pump water or irrigate with pivots, check the weather in real time and see just how much moisture is in the ground at any given time. Rick King, a Mississippi College graduate, grew up helping his dad, Virgil, who was a consultant to farmers.

“I was brought up scouting fields and working with him,” King says. “Insect control, weed control and disease—these days there’s a lot of different layers.

The accounting major then went to MS State to study etymology. His father had studied pre-med at Ole Miss, but also went to MSU for their etymology education. 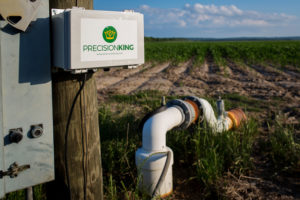 started making the devices that we market. Working on the farm every day, I saw there were a lot of efficiencies to be gained in the way that we irrigate crops. So, I started focusing my time and efforts on helping our growers be more efficient and conserve water. Those two go hand in hand.”

King’s “remote sensing business” began as selling straight to farmers but with the popularity and need of his sensors, Precision King created a network of distributors to handle the demand and need.

“We make five different products that use cellular connection so you can check in and get real time data,” he says.

Precision King has a weather station—the Climate King—that monitors air temperature, humidity, wind speed and direction, wind gust and a few other values. It can be combined with Watermark sensors to monitor soil moisture. There’s also the DecisionKing that measure soil moisture to help with irrigation plans, the PumpKing that automates an electric well pump to start and stop with a few clicks on a cell phone. There’s a version for diesel pumps as well that allows remote monitoring and stopping of the pump. The RiceKing allows a farmer to automate his rice field water level from his truck, office or home without getting out in a muddy field. The farmer can pair it with the field’s electric pump to turn the pump on and off. The PivotKing can remotely monitor a farmer’s irrigation pivot and text him/her if goes offline for any reason. It features a GPS tracking map with satellite imagery to show the pivots progress. It features a remote shut off as well. There’s also a feature that allows a farmer to select a specific bearing where the pivot can stop automatically upon reaching.

“You can keep up with things in real time,” King says. “If a pump is out of power or out of fuel it will alert you. When you combine our products you’re not turning a pump on until you need to and it makes the pump as efficient as we can get it. It’s about ‘smart farming’ and using technology to make irrigation more efficient and easier for a farmer to manage their irrigation needs.”

Daniel Cole is King’s business partner and they have a Chief Operations Officer, Richard Pickens. Precision King has grown consistently throughout the Magnolia State and new extends into Arkansas, Louisiana and Missouri.

“We’ve grown incrementally which is the strategy. With technology, there is a testing time. We started with a handful of sales and direct sales into a dealer network,” he says.

Conserving water is key to helping farmers make a living farming by keeping costs down but King started a new venture to bring living water to those in need in Africa. In 2016, he and his partners started a non-profit mission—GraceWater.org. 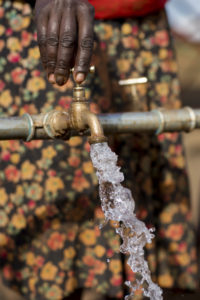 “When I was at Mississippi College I thought I’d be in the non-profit ministry world. But, when I got to the end of my time there the Lord led me in a different way and brought me home to the family business,” King says.

The ministry goes to Africa and drills needed water wells for villages that have no access to water. Last year was the inaugural drilling season with two wells in Harare, Zimbabwe for two orphanages. GraceWater has plans to dig ten this year.

“We’ll go in November and then again the first of February or March,” he says. “Primarily our work is done in Zimbabwe but in the future, we are going to do some stuff in Zambia and other southern African countries.”

According to King, the ministry came about from a “friend of a friend of my father’s” and this fellow traveled the world linking American churches to missionaries. This allowed them to have multi-year relationships with groups. That was through the Global Focus organization.

“He was the first person I told and he connected with a family from Benoit and he connected us with a pastor in Zimbabwe,” King says. “It is an undertaking but instead of talking about wanting there to be change, we’re the kind of people that get our hands dirty providing a solution.”

By bringing fresh, clean water to villages and the millions of African people they are able to grow crops, feed their families and live. No more multi-mile hikes with five-gallon buckets to bring back unsanitary water.

“They started asking how they could join us and help us. It’s neat to see how the industry has come together for this cause,” he says. “There’s a lot of need.”

It takes three days to dig each well and it takes an eight to ten-person team who also scout out other well location and needs while there.

Helping farmers conserve and efficiently use water while finding water for those in need—Nick King of Precision King.