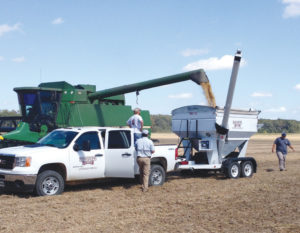 Preston Aust may not have dreamed of being a Mississippi State University Extension Service agent, but he has cultivated a career that he finds both challenging and rewarding. Born and raised in Belzoni, Aust grew up in a farming family.

“My family farmed catfish and both of my grandfathers had row crop farms. So, I pretty much grew up in a farming environment. I graduated from Humphreys Academy and Mississippi Delta Community College prior to going to Mississippi State University to get my B.S. in Ag Engineering Technology and Business,” says Preston. “Before MSU Extension, I worked for nine years as a farm manager. During that time, I began farming a few hundred acres of my own, picking up a few acres here and there.  I later went back to MSU for graduate school and received a M.S. in Ag Information Science.

“I did not grow up with dreams of becoming an extension agent. It was just one of those opportunities that came along, and it seemed to fit. The retiring extension agent, Eddie Harris, called me one day and told me that he was getting ready to retire and thought that I would be a good fit for the job. He was my 4-H Agent when I participated in 4-H Livestock as a youth,” says Aust. “So, after giving it a little thought, I applied for the job a few months later, and in July 20ll, I was hired as the MSU Extension County coordinator/ag and natural resource agent for Humphreys County.”

Aust’s main responsibilities are ag and natural resources, 4-H, and economic community resource development.  “The most rewarding things I do are working with local row crop producers and our 4-H Livestock Program. I enjoy the challenges they both bring. It is always something new to keep you on your toes with both of them,” says Aust. “Currently I am also working Sharkey and Issaquena counties as their ANR Agent. I like helping people; that is what I love about my job.”

The extension service helps farmers in many ways. “I offer annual Worker Protection and Private Applicator classes for producers and their employees. We work with them on irrigation plans using Pipe Planner. We use traps to monitor the South Western Corn Borer Moth flight and communicate with producers on when to make applications. One of my favorites is the Soybean, Corn and Cotton Variety Demonstration Plots,” he adds. “We coordinate with extension specialists and producers to plant, monitor and harvest for yield large demonstration plots. This data allows producers to have years of data available to help them pick proven varieties to use on their farm for upcoming seasons.

This field is mostly dictated by mother nature, which means farming continues to be a gamble, but it’s one most farmers are willing to take. “The best way to describe the 2018 crop is they were good, but not great. Soybeans were our number one planted commodity. Yields were good, but we ran into seed quality issues due to high moisture environment late in the season. Corn was definitely our most issue-free crop last year,” he says.

“Yields were respectable, and we made it through harvest with very few problems. Cotton yields were down a bit, but still respectable. However, an early winter made conditions for harvest very trying and many producers across the state were still picking cotton in December. In spite of all the problems, yields across the board were good.  However, producers struggled with marketing a crop in a time of low prices.”

As for 2019, Aust says the year has started off being a wash to say the least. “It has been the most trying planting season I have ever witnessed. I saw somewhere that it was the wettest spring on record. All of our corn was basically planted in three to four days around March 20. And then much of that was replanted due to heavy rains and cooler than normal temperatures. And just when it looked like we were going to catch a break, heavy rains returned in early May,” he says. “So, we are below our intentions on corn acres and many of them are off to a rough start. The majority of our soybeans and cotton are being planted four to six weeks past our prime planting window.”

Also in 2019, flooding from the Mississippi River and its backwater and the price volatility due to the absence of a trade deal with China are two major challenges facing producers.

“Based on commodity prices, we needed to have a record year yield wise to cash flow at prices coming into planting. And we have had one of the roughest starts that I can remember, which will make it almost impossible to reach those yield goals we desperately need,” says Aust. “On a positive note, flooding across the mid-west currently has their crop planting delayed and now they have pretty much missed their prime planting window. Many of my producers in Issaquena County will not be able to plant anything this year due to flooding. There are also producers in Sharkey, Yazoo, Humphreys and Holmes Counties that share this same fate due to the duration of flooding this year. And many are flooded out of their homes as well.  By the time the water goes down, they will have missed a crop.

Aust notes that farmers are the most resilient people he knows.

“This year has been hard on everyone. Remember to help others every chance you get.”