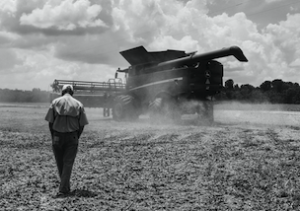 Father and daughter Randy and Victoria Darden don’t always see eye to eye when it comes to running L&R Farms in Onward, a community just outside Rolling Fork.  But, they both love the land that has been in their family for generations. In early spring, they watched rising floodwaters cover their fields.

It brings back memories of 1973’s flood, which displaced the family. Randy did plant that year, but later in the season, so he knows from experience how the schedule can be flexible. Victoria, twenty-seven, struggles now with not having a plan. “There’s a lot up in the air,” she says. “It’s very disheartening. This year is nothing like I’ve ever seen before. It’s so saturated it’s just absurd. It’s just mud.”

Until a few years ago, Randy had no idea who would carry on the family’s farming tradition when he decides to retire. He thought he’d rent out the land, and let the land support him. Victoria grew up on L&R Farms as an only child. “I was always with Daddy when I was little,” she says, but didn’t have a firm understanding of how the farm worked and what was involved.

When she headed to Hinds Community College, Victoria planned to become a veterinary technician. Then, she quickly realized that wasn’t the field for her and considered a future in agriculture.

Before switching programs, Victoria discussed the change with Randy. “He never persuaded me,” she says. “He wanted me to pursue whatever I had in mind. He never gave me the burden of saying you’ve got to come back home. He’s proud that I’m home and he knows how hard it is.”

“I was really, honestly, in a way shocked,” Randy says of Victoria’s decision to make a career in farming. “You’ve got to have a lot of determination to want something, go through a lot of hard times.”

Though Hinds’ ag program was much more cattle-based than focused on row crops, Victoria found her niche. “It clicked just like that,” she said. “It was like being at home.”

While earning her associate’s degree, Victoria began actively working on the farm and learned how to drive the tractor. “I like doing the work,” she says. “Even though it’s a man’s field technically, I like the fact that I can do it.”

Next, she headed to Mississippi State. “I knew I needed a degree,” Victoria says. “I’d heard that my whole life.” She found the classes challenging, especially those involving chemistry. “I had no idea there was so much science,” she says. “I just knew we sprayed sometimes. State opened my eyes completely.”

Victoria returned to Onward with her degree and began taking on more responsibility on the farm. “It’s a lot for her to learn and grasp,” Randy says. “It’s so much to take in. She had to learn the accounting part of keeping books, where you get the money from, you’ve got to pay it back and what comes first. It’s an accumulation of things.”

And he’s stressed two important lessons with his daughter. “You’ve got to get the crop in the ground, then get it to the elevator,” Randy says. The next lesson is to pay back what you borrow. “It’s pretty easy to get money, but it’s tough when you have to pay it back.” Long days on the farm start early. “I get up before daylight and I go to bed about eight o’clock,” says Randy. He’s no fan of procrastination. Take care of tasks so you don’t have them weighing you down later, he tells his daughter.

Randy remains Victoria’s main source of counsel. “He’s seen things other people haven’t,” she says. “I go to him because he has the experience. He has the knowledge that I can’t download overnight, priceless knowledge.” And for Victoria, working with her father has multiple benefits: “I get to learn from him; I’m carrying on the legacy.”

That doesn’t mean they always agree. “I realize he sees me as an adult, but sometimes as a kid,” Victoria says. “I still go with him and I offer my opinion probably a little more than he would like. I tend to like to do a lot of talking; that’s how I learn.”

The nearly 1,200-acre farm grew corn and soybeans until three years ago when a depressed market price for corn convinced them to concentrate on soybeans, said Victoria, even though she would prefer to rotate the crops.

When she’s planting, Randy’s there to help her load the hoppers. “I can do it all, but I don’t like dragging turnrows. He likes his turnrows nice and smooth,” Victoria says. She also knows she needs work on pulling and backing up the trailers. There’s plenty of on-the-job experience, like when she had to replant three times because deer love the taste of soybeans.

“I enjoy the fact that I live here in the middle of nowhere,” Victoria says. “I can’t see myself doing anything else. I can’t see myself inside an office, inside all day.” While she’d like to expand, current market prices and high water conditions hold her in check. “The basic answer is I get my crop in, I get it out and I get all the bills paid,” she says. “To me that is success.”

And while Randy didn’t try to dissuade Victoria when she wanted to make a career out of farming, he did tell her it was a hard life. “We have women in ag around here, and I guarantee you they are pretty tough people to deal with, but there aren’t many, I promise you,” he says.