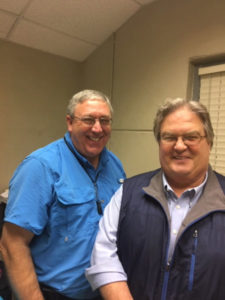 Mississippi State Extension Service Ag Agent IV Jim Burkhalter was no stranger to this field when he took over the reins in Tallahatchie and Panola counties.

In fact, Tallahatchie native said he was already involved “up to his neck” in agriculture for 20 years before he joined the ranks of MSU.

“In 1997, I saw an ad in the local paper stating that Mississippi State University Extension Service was looking for an Ag. Agent in Tallahatchie County. I had 20 successful years farming but was at a point where my employees and my equipment were getting old,” he says. “I was growing 600 acres of cotton and had reached a point where I needed more acreage to keep up with the ever-increasing cost of production. I interviewed and got the job and have worked as an Ag. Agent in Tallahatchie County for the past 22 years. I have been also covering Panola County for a little over a year now.”

Burkhalter wears many hands under the auspices of agriculture and all that it implies. 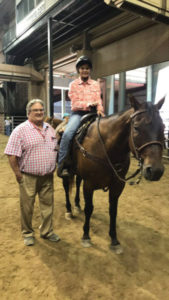 Youth Livestock and horse programs, 4-H Youth Shooting Sports, crop reporting, pesticide education, and anything else that comes through our door,” he adds. “The thing I love most about my job is getting to work with farmers and know that I am helping them to get what they need to make the best crop they can every year.”

Burkhalter, who graduated from Mississippi State University with a BS in agricultural economics, provides numerous services to farmers and helps to keep them on the cutting edge of agriculture.

“We keep them current with any and all new innovations that come into play concerning Row Crop production. We renew their Pesticide Certification and keep them informed of any changes that may occur from year to year. We have the best of both worlds in Tallahatchie and Panola Counties. They are both half hills and half Delta which means we have land suitable for row crops, forestry and cattle production,” he says.

The dual landscape is business as usual for Burkhalter, being no stranger to the hills or flatland.

“I grew up working on the farm with my brother and father. We all lived in the hills, but we worked row crops in the creek bottoms in the hills and in the Delta, which was about 20 miles away from our home place. The 20 years that I farmed on my own, I lived in the hills of Tallahatchie County. I grew up on the farm with a cow/calf operation along with my brother and father. Later my father retired, my brother moved to the Delta and I continued with the same set up until I accepted the extension job,” Burkhalter says. “From planting to harvest, the row crops require attention from April through around the end of November. The cattle, since they are live animals, require attention year-round. But while we were free in the winter months, we kept busy feeding the cattle and basically keeping them alive and healthy. A farmer wears many hats. A mechanic, veterinarian, horticulturist, turf manager, marketing expert, and a chemist. Basically, a problem solver not unlike an extension agent.”

As for 2019 production, Burkhalter sees ag trends remaining like the year before with one exception. “I believe that the average production will be really like the 2018 crop except for soybeans. I believe that we will beat the 2018 soybean average due to the timely rainfall that we have had throughout the growing season this year – regardless of most of it being planted later than usual,” he says. 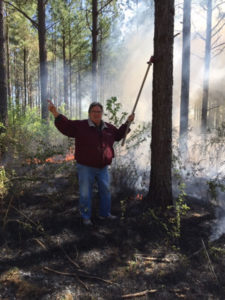 they plant. What is a constant for each producer are the challenges they handle on a daily basis. Burkhalter says one such steadfast factor is dealing with weeds and insects, which continue to become more and more resistant to pesticides. Most obstacles farmers face is manmade. “Farmers have to cover the costs of production with the low prices they receive for their commodities,” Burkhalter says. “There is also the labor pains and equipment costs. Add on dealing with changing regulations and you see farmers have a lot to contend with in their operations.”

As for Burkhalter, he will continue to do all he can to provide information, updates and   to farmers. It is a job he loves in a place he loves.

“I’ve been married to my first wife for 42 years now. She, (Barbara) is an “Army Brat” and lived in many different places before she found me. When we married in 1977, I moved her from Spartanburg, S.C. to Charleston,” he says. “After I graduated, I came home to farm. We have two daughters, both married and my oldest daughter gave us our first grandchild the first of March this year. I’m very proud of my daughters and their husbands. My favorite pastimes are my walk through this life with Jesus. The hobbies are quail hunting and crappie fishing with my friend/friends. And now, I also enjoying spoiling my grandson.”