By Angela Rogalski • ***(Photo by Robert Jones)**** note: the photo of Brittney 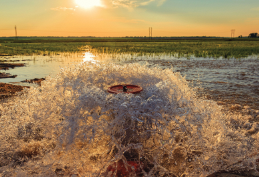 Many who look out over a field of soybeans or corn or rice don’t necessarily see artistic beauty or have a creative inquisitiveness about what they’re seeing and why. They may see beauty in the rich, growing crops, which is a pleasing sight, especially if you’re the farmer who planted them; they may see hardworking men and women harvesting that rich bounty, which is also a thing of beauty when it comes time to reap what you have sown.

But, for Brittney Turner it’s a totally different view, one of artful symmetry and fascinating curiosity about modern technology in farming.

“I grew up in Newport, Arkansas and I was a photographer,” Turner says. “I photographed weddings, children, and family portraits. And then a small project came up, and I was only going to do it for three months, during harvest. And that was about five or six years ago. I needed something related to the Delta for this particular project, and I found myself thinking about new angles. To me, everyone had tried to recreate that old, nostalgic Delta. And there was nothing that I could add to that.”

Turner says that’s when the idea of photographing agriculture came to mind. “I and realized that many people don’t

think about how much modern technology, in the Delta, is related to agriculture, unless they’re actually  farming. So, focusing on modern agriculture was something that fascinated me. I went through that first project’s harvest and I just kept going.”

After that experience, Turner says she thought about selling her photos as stock photography or she could actually go out and get commissioned jobs. So, for about a year or two she did things on her own, just whatever and whenever the mood struck her, using her camera on the ground and in the air to create compelling stories of modern agriculture.

Then around 2016, she received a call from Cotton USA that would prove instrumental in her future as an ag photographer.

“They licensed almost all of my cotton pictures,” she says. “They use them on their websites and on their trade displays in China and in Europe to help promote the sale of U.S. grown cotton overseas. It’s also known as Cotton Council International and is part of the National Cotton Council.”

Turner’s latest project has been an entire book commissioned by a Delta farmer to document his own personal journey in farming. And Turner says it was so interesting and enjoyable to do that she would love to do it for more farmers in the Delta.

“We started with planting season and went through the entire process,” she says. “During planting and harvest, I would probably be out in the fields two or three days per week. And during growing season, I would be out there maybe once a week or once every ten days.”

Turner calls this commissioned photography “Land and Legacies.” And she plans on offering this service in her business as often as possible.

“Basically, for anyone who wants or needs this service, the end goal of course is the book. We’ll start with the history of the farm by obtaining any old photographs or documents that the client wants to include, which will tell the history of the farm, and then I’ll go through an entire year of photographing the farm. And then we tell that story as well.”

Turner lives in Memphis, Tenn. and she has also created a T-shirt line that was inspired by her ag photography. She uses her photographs taken in the field, then hand paints scenes onto canvas creating a one of a kind, original piece of artwork, which is then used for printing designs onto the shirts.

“It’s called Bushels & Bales and it has been quite successful.”

Turner’s parents aren’t in the agricultural profession. Her father owned video stores all over Arkansas for over twenty years and right before the DVD explosion, he sold all stores to Blockbuster. He also owned tanning salons and just recently sold those as well.

“My step-father manufactures horse trailers, so I don’t really come from an ag background,” Turner says. “When someone in the ag business or a farmer sits down and looks at my pictures, it’s a huge compliment for me when they tell me that I ‘get it.’ That I totally get the farming lifestyle and the world of agriculture. As to why I get it, I’m really not sure. But the crazy thing is, honestly, when I think about photographing agriculture, I photograph it as though I was doing a wedding. I’m telling a story and all the details have to be there.”

Turner plans to compile all of her photographs one day into a book on Delta farmers and agriculture.