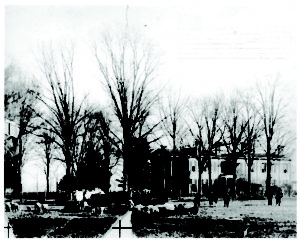 Belmont Plantation is a much celebrated and world-renowned bed and breakfast nestled in Washington County. It is a whimsical site for weddings, dinners, political events and festivals, but its history is steeped in agriculture.

The construction of Belmont started in 1856 and was completed in 1857. “The construction was primarily undertaken by carpenters who came down the river from Missouri during the cotton boom. These men were aware of the newly minted Mississippi millionaires in the Delta and built many homes during the years leading up to the war. They had many connections in Missouri and shipped down a wide variety of products needed to construct these mansions including doors, windows, fireplace mantles, and lighting fixtures,” explains Camille Collins, who runs the B&B. “The plans typically came from traveling salesmen’s architecture books which were filled with the latest designs from the decades top architects. Some of the more basic building materials came from the plantation itself including large cypress timbers used for the structure, slave made brick for the exterior walls, and wide plank cypress lumber for the interior and exterior floorboards.”

According to Collins, the Worthingtons were a very successful family who came down river with friends of theirs from Kentucky. They invested heavily in the area, as did their close friends, and purchased thousands of acres of land sharing up to a half dozen plantations, among them were Wayside, Sunnyside, Redleaf, and of course, Belmont. 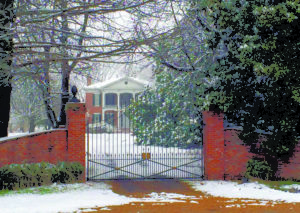 (the steamboat stop) and still existing Arcola, which is located adjacent to the original rear acreage of Belmont. The cash crop at this time was cotton and that was all that they farmed. Except for small kitchen gardens that were located at each plantation home, and common with the times. In addition to the kitchen gardens, the Worthingtons also had abundant strawberries, fruit trees, and muscadine vines at Belmont,” Collins says.

At one time, Belmont itself consisted of up to 10,000 acres, but today only seven of those original acres remain with the house. The mansion itself remained in family hands until the great flood of 1927, when there was an estimated nine feet of water on the interior of the home. Due to the extensive damage and the downturned economic climate leading up to the Depression, the Worthingtons left the house in the hands of the insurance company who quickly sold it to the second owners of Belmont Plantation – the Weathers.

“The new owners restored and remodeled the house immediately, adding indoor plumbing, electricity (all of the lighting was natural gas prior to this), and adeptly finding use in some nearby architectural salvage,” Collins says. “You see, one of the Worthington’s plantations across the street, Wayside Plantation, was also heavily damaged during the flood. The new levee system cut the house off from society as it ended up on the river side of the new earth works so it was destined to be torn down for parts. This is when the Weathers stepped in and saved many of the same elements that the Missouri carpenters brought down during construction, like interior doors and doors. In fact, the new bathrooms and closets at Belmont now have perfectly matching doors to the original because of those that were saved from Wayside.” 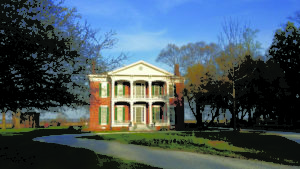 The Weathers were in the home until the 1940s and by that time the house was beginning to suffer from lack of maintenance once again. In 1942, a cousin of the current owner stepped up to save the mansion again. Belmont Plantation was purchased by Mississippi Governor Dennis Murphree of Calhoun County and turned into the Belmont Hunting Club. A large group of men and their families from Calhoun County used the club as home base for the next five decades.

“They continually maintained the mansion over the years until many of the members had passed away and the club grew thin. At this time, in 1992, the house was purchased by Fernando Couquet of New Orleans. Fernando was an attorney, a diamond miner, an oil speculator, and a real estate investor. He was also the gentleman to ‘invent’ the riverboat casino in Mississippi, opening Splash Casino around that time period in Tunica,” Collins says. “The first of its kind, Splash made millions and Fernando spent many of those millions restoring Belmont once again. Fernando and his wife were in their 70s when they moved into Belmont and lived there many years as it started to decline once again.

“It was twenty-two years later when the Couquets were in their 90s that the family moved them out of Belmont and it was foreclosed on by the bank, the second foreclosure in Belmont history. The current owner and cousin of Governor Murphree already knew about the plantation due to his interest in the now burned Mount Holly nearby. Joshua Cain, my second cousin, purchased Belmont in 2015 and started the arduous task of its restoration for the fourth time, just as his cousin had done to give Belmont her second lease on life,” Collins adds. “To date, we have invested over a million dollars in restoration work, and our work continues to this day as we are currently working on the original and the largest smokehouse in Mississippi still standing today.

While agriculture hasn’t been a part of Belmont in many years, she remains a humble attraction for those seeking to learn about those days gone by.

“The bed & breakfast helps defray some of those costs, but this is really a labor of love,” she says. “Joshua Cain is a historic preservationist, designer, and real estate investor. He is currently living in Los Angeles and appreciates this plantation and its history. While we host many business travelers and relatives of locals, most of our overnight customers are international guests touring the Blues Trail from New Orleans to Memphis or vice versa. Through our four years of ownership and restoration, we have been lucky enough to have many original pieces of furniture donated back to the house for our safekeeping. While we are still hoping to save other pieces, we have located oil paintings and bedroom furniture and we have received many treasures such as a rococo revival dining table, a rosewood dresser, a marble topped turtle table, and a portrait of Edna Worthington. We also have obtained pieces from the Weathers including a sofa and a parlor chair. We were recently donated a mantle clock belonging to Governor Murphree himself.”

To spend a night in one of the many time period furnished rooms, call 901-652-1390 or visit their website at www.fb.com/belmontplantation or www.belmontplantation1857.com. Belmont Plantation is located at 3498 Mississippi 1 South, Wayside, MS 38780.