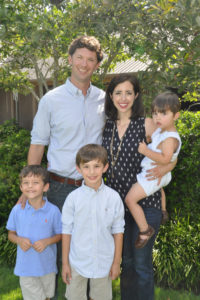 Even though he grew up on the farm, David Arant, Jr. went off and got an education as an engineer at Mississippi State. He put that knowledge to work and solved problems in his chosen vocation working in Jackson for six years. But Arant had Delta dirt in his veins and eventually found his way home and to the farm with his family in tow to be part of the nearly 100 years of the Arant family farming operation. He’s been successful along with the rest of the family in the farming business. He did bring his engineering acumen to the farm.

So much problem-solving success, he was recently awarded the Farm Bureau Achievement Award acknowledging much of the hard work and problem solving on the farm.

“It takes a look at your operation and what you’ve done to get improvements made and what you plan to do in the future,” he said. “The main reason we were successful in winning this award is that we’ve been innovative in the rice business and thinking outside the box. We’ve done water improvement and water conservation.”

Arant also works with Farm Bureau to help them understand more of what farmers are facing on the turnrows not only in the Delta but across the country.

“I’m on a water committee where we work with Farm Bureau, so they know what’s important to farmers around the country about water quantity and water quality is concerned,” Arant said. “We give our opinion and so they know what they want to tackle on the national level.”

His favorite part of the farm these days includes “the anticipation of the new year. It’s too wet right now to do anything but pretty soon it will dry out and we’ll go till it gets wet again. That’s the fun of it and if it doesn’t rain then there’s a lot of work. There’s always excitement to start the process.” 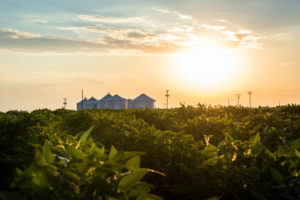 David and Rebekkah have three children, Carver (8), Walker (6) and Hunter (2) who aren’t out working the turnrows—yet. These days, Arant can be found working the rice fields and other acreage but the rice has brought a new side road endeavor—Delta Blues Rice.

The actual “farm to table” product comes straight from the field and gets polished and bagged up for sale to restaurants and grocery stores.

The family first farmed cotton and soybeans until rice was added in the 1960s.  There was an old rice milling machine they used to mill their rice for friends and family. But as the farm to table movement took hold, the Arant family had an idea to truly bring their rice straight from the field to the family table—in restaurants and homes and grocery stores. David Arant, Jr., and his dad David Sr. and Uncle Hugh Arant, Jr., all work together on the farm and work in bringing the fruit of their local labor to tables.

The younger Arant’s wife, Rebekkah, coined the phrase for them, “Feed the body. Feel the soul,” and Delta Blues Rice was born. The land that gave America the blues and plenty of its food combined the two for an artisan rice that’s catching hold across the south.

“We have been milling rice for decades,” David Jr. said. “And we gave it out as Christmas gifts. And folks were always asking for more rice.”

But the family didn’t know how good their product really was or if folks enjoyed it because of the price. With more folks continuing to ask, the Arants decided to mill more and try a different side of the rice market. The family started packaging and selling their rice as well as rice grits—bits of shorter rice pieces.

With new equipment, the Arants have been “milling on demand” as they mill to fill orders each week. The process is seemingly simple, although much equipment and time are required.

“To get brown rice you just take the husk off the rice. To get white rice you run it through a polisher and that takes off the bran that’s right under the husk,” he said. “We’re still doing it on a smaller scale. We mill when we get orders in. That way we insure the freshness.”

Now the farmer gets off his combine to take the harvest to a local table. Restaurants have started carrying the rice and the Arants are looking to get their product to a larger supplier.

“We do food shows and mostly it’s word of mouth or one of us taking a sample by and letting them try it,” he said. “The rice business is going good these days. I’ve been pleased with the growth we’ve had and hope to continue it and make it a viable business.”

Delta Blues Rice has a unique flavor, and the Arants use only one variety that was developed in Stoneville, Miss., which they plant to help insure the flavor doesn’t change. Stores throughout the state carry the rice currently.

“We sell to gift stores, and we were extremely busy during Christmastime,” he said. “Chefs who use our rice tell us that our rice is different from others. That means something to us. We have a good product.”

They’ve recently added a Jasmine rice product and are getting a good response from consumers. The Arants enjoy having more control over the selling of their crops, but they have to keep prices competitive. It is their goal to supply a quality product at a fair price.

“We’re subject to whatever the commodity markets are giving us. You go to the rice mill with your hat in hand and ask what they’ll give you,” he said. “But when you’re milling your own rice, you command a little bit higher price for your product per bushel. Right now, we’re on such a small scale it’s not making much of a difference, but as it grows hopefully it will.”

They’ve distributed it to “restaurants from New York to Seattle and everywhere in between. Our name is getting out and word is being spread. I’ll get an online order form across the country and it’s amazing to have folks from New York and California hear about us and order. It takes a lot of time to build something up so that its sustainable.”